Joe Shew, former chief financial officer of real estate website Homestore.com, spoke to parents and students on Friday about his journey from a self-described “clean-cut family guy” to someone guilty of securities fraud. Shew was accompanied by his lawyer, Bob Fairbank, a USC Law lecturer.

To start the talk, Shew played a clip of a news anchor reporting the Homestore.com scandal.

“As I watched that, my heart was pounding out of my chest,” Shew said after the clip was over. “I watched that in my bedroom with the door shut and locked, basically curled up in the fetal position. After months of cooperating and then pleading guilty, the inevitability of my reality hadn’t caught up with me.”

In 1998, Shew left his post as an executive at The Walt Disney Company to join Homestore.com, which went public in 1999 and quickly became the top real estate site on the Internet.

Promoted to chief financial officer in 2001, Shew said he faced constant pressure to recognize revenue, which led to Homestore.com executives making illegal roundtrip or triangular transactions in the first three quarters to falsely inflate the company’s stock price. Shew eventually was sentenced to six months in prison, followed by six months in home detention and the agreement to be permanently barred from serving as an officer or director of a public company.

“It happened in an instant,” Shew said. “Everyone wants to know when the meeting happened where we put out hands in the middle of the table and said, ‘Let’s go commit securities fraud. Ready! Break!’ It just doesn’t happen that way; it’s an insidious process that leads you to that point.  I’ve always been a good person. But regardless, I’m standing here.”

Shew explained how what began as a single transaction led to a nine months-long scheme in 2001 to defraud investors. He said the need to keep the stock price up led to one false transaction after another.

“We were caught up in it. We had to do a second one. We had an insatiable desire to meet and beat, to be tier one. We had to have revenue at all costs,” Shew said.

“I was cooking the books by day, doing nothing for my family by night. That’s how all-consuming it is,” Shew said.

He quoted a criminologist who wrote, “When good people come in contact with crime, they abhor it. Then they accept it. The longer they do it, it begins to drive them.” 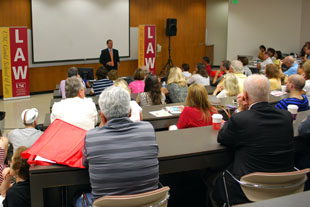 Shew described the difficulty of having to tell his friends, family and business contacts what had happened, of having to be dropped off by his wife at a detention camp, where he worked in the kitchen. Meals included Wendy’s fish filets that had been expired for six years. But Shew said the hardest part was explaining everything to his four-year-old and six-year-old children.

During the legal process, Shew completely cooperated with the investigating authorities, leading to a lighter sentence than the other executives received.

“The whole goal was to let him face his kids after this,” Fairbank said. “We said we’re going to make you as proud as you can be about this horrendous thing in your life. That’s why he did so well -- he was truthful. He did massive cooperation at great risk to himself. We’re not saying what he did was good, but he was the rare person who did that.”