Author of Should Trees Have Standing? remembered for far-reaching ideas, sense of justice, generosity to peers 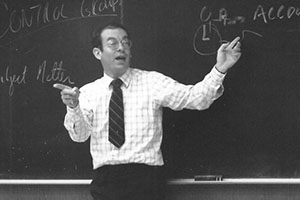 Professor Christopher D. Stone, 83, J. Thomas McCarthy Trustee Chair in Law, Emeritus, passed away May 14, 2021. Widely known and admired as an innovator and authority on environmental law, Professor Stone is credited as a founder of modern environmental advocacy who argued that the natural environment had legal rights. He was a member of the USC Law School (later the Gould School) faculty from 1965 until his retirement in 2013.
Stone was respected in academia for his interdisciplinary research and scholarship in topics spanning legal philosophy, corporate crime, alternative energy policy, climate change, biodiversity, ocean policy and trade law. He was best remembered for far-reaching ideas and his sense of justice, exemplified in a 1972 Southern California Law Review article, “Should Trees Have Standing?” that argued that as corporations and ships, among other things, were sometimes considered by the law to have rights, the environment merited the same recognition. The article was expanded into a book, Should Trees Have Standing?: And Other Essays on Law, Morals & the Environment, published in 1996.
“I am quite seriously proposing that we give legal rights to forests, oceans, rivers and other so-called ‘natural objects’ in the environment — indeed, to the natural environment as a whole,” he wrote in the law review article. U.S. Supreme Court Justice William O. Douglas cited Stone’s research in a dissent against a 4-3 SCOTUS decision in 1972 that the Sierra Club had no standing to sue the Walt Disney Company, then planning to build a resort on public land in the Sierra Nevada. Obituaries in The New York Times and Washington Post referenced the article, and quoted scholars in environmental law, including Professor Robin Craig, who recently joined the USC Gould School faculty, on the article’s enduring influence.
“What he was basically asking was how should the natural environment be represented in court,” said Craig in the Washington Post. “Did it have a right to be there on its own merits, so to speak, or was this really all about humans? It was an important question, and it’s a question that hasn’t gone away.”
In addition to his strengths as a researcher and writer, Stone was unselfish in his support of fellow faculty who often sought his thoughts on their research.
“Chris was undoubtedly a gifted scholar, yet he was equally generous in sharing those gifts to elevate the work of his peers,” said Gould Dean Andrew Guzman. “He was an important mentor to many Gould faculty, often taking the time to delve deeply into his colleagues’ work with probing questions and then drawing thoughtful connections to current events issues or scholarly work in other disciplines. And, he did all of this with a genuine charm and warmth — as well as a unique sense of humor — that endeared him to countless colleagues.”
Stone earned his JD from Yale Law and graduated magna cum laude with a degree in philosophy from Harvard University. He went on to become a fellow in law and economics at the University of Chicago and practiced law at Cravath, Swaine and Moore LLP in New York, before joining USC Gould in 1965. His father was the influential and acclaimed journalist, I. F. Stone. He is survived by his wife, Ann Pope Stone; two children, Carey Stone and Jessica Stone; a sister, Celia Stone Gilbert; and two grandchildren.
As an educator, Stone was instrumental in shaping the law school into what it is today. He was among the cohort of faculty in the 1960s who pioneered the innovative course, Law, Language and Ethics, which cemented USC Gould among the first law schools to incorporate an interdisciplinary approach to the study of law.
Inside the classroom, Stone was committed to the growth and success of his students, challenging them with high expectations while making himself available and accessible to any student needing his guidance.
In recognition of his extraordinary contributions, USC honored Chris in 2014 with the Faculty Lifetime Achievement Award, given to a very select number of retired faculty at the annual Academic Honors Convocation.
In addition to Should Trees Have Standing? Stone wrote or co-wrote five other books including The Gnat is Older than Man: Global Environment and Human Agenda (Princeton University Press, 1993), and Where the Law Ends: The Social Control of Corporate Behavior (Harper & Row, 1975), as well as numerous articles and book chapters.