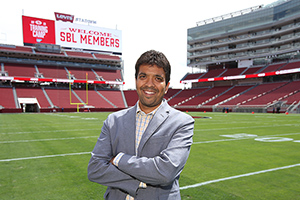 Sean Kundu (JD 2007) vice president of corporate development for the San Francisco 49ers football team, did not see himself working in sports when he was a student at USC Gould School of Law. But his training in law, as well as strategic networking through the Trojan Family, turned up opportunities he never imagined. These days, he’s sharing his experience with USC student athletes to help guide them on their own career paths.
“[These athletes’] effort, energy, drive and discipline are exceptional,” says Kundu, who in June spoke at a luncheon for USC student athletes as part of a professional development effort led by USC Athletics in partnership with USC Gould, USC Marshall School of Business and USC Annenberg School for Communication and Journalism. “They may not all become professional athletes, but if they have demonstrated those efforts by becoming exceptional in their sports, they can do it in anything. Each of us has innate abilities and we should leverage those skills in thinking about what comes after [college].”
Kundu was asked to speak at the luncheon by Dr. Nickey Woods, associate dean for student affairs, diversity, equity and inclusion, whose DEI work led to USC Gould partnering on USC Athletics’ efforts to broaden educational and career opportunities for student athletes, especially those of color.
In 10 years with the 49ers, Kundu’s roles include legal and strategic management and overseeing corporate development for the team’s affiliated businesses. He also manages legal affairs for 49ers Enterprises and is involved with the 49ers high school sports highlight shows Cal-Hi Sports and 49ers Sac-Hi Sports. He credits the Trojan Network within the Gould community for supporting him as he weighed different career choices — an experience that inspires him to give back as well.
“I didn’t know what I wanted to practice when I graduated, so I reached out to every partner at the major law firms in L.A. that went to Gould, just for information, not looking for job,” he says. “All of them responded the same day and carved out the time for me. Now I want to give back to the school and USC community, to help others who feel the same way I did.”