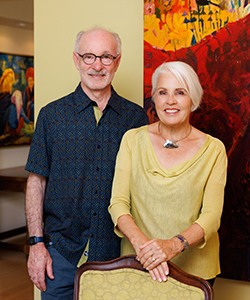 When John and Alaine Weiss think about what made them who they are, they both agree it was their education.
Reflecting on their lives in the process of retirement and estate planning, the couple is seeing things from a different perspective and thinking about how to make it possible for others to pursue satisfying careers. “Each of us looks at our undergraduate and graduate school backgrounds, and they played such an important part in terms of who we are, how we view the world, our career success, our personal success,” says John (JD 1979), who earned undergraduate and law degrees at USC.
Alaine, who received her undergraduate degree from Michigan State University, an MBA from Indiana University and an MS in counseling from California State University, Long Beach adds, “Looking back, you realize that, but for that education and the factors that made it possible for you to have that education, you probably wouldn’t have had the career success, life satisfaction and wherewithal to help others.”
John spent 35 years as in-house counsel for Beckman Coulter, Inc., a Brea, Calif.-based corporation that develops and manufactures biomedical testing products. He met Alaine in 1989 when she was recruited by Beckman Coulter to head international human resources. Already annual donors to their schools, the couple wanted to include USC Gould and Alaine’s undergraduate institution, Michigan State, in their estate plan.
“We asked ourselves: Who will benefit the most from having that additional help? That was a big driver for us,” Alaine says.
First and foremost, they want their gift to help students afford tuition at their alma maters. “One of the things that made it possible for me to stay at USC as an undergrad was that I had a scholarship,” John says. “That set the foundation for me to be able to go on to law school because I wasn’t already debt overburdened by the time I got through school.”
They also want to focus on students with special circumstances — those coming out of foster care or first-generation students, for example — students for whom it’s not a given that they can attend an elite school and earn a degree.
“Some young people come from backgrounds where they didn’t have a family support structure in place, they don’t have a lot of money behind them, their friends and social group don’t understand why anybody would want to go to all that work and trouble,” John says. “Their margin for error is zero. Those are the individuals for whom those degrees may make the most difference in their lives, helping to elevate their opportunities and giving them choices they might not have had.”
Avid world travelers who have always appreciated different cultures and perspectives, the couple also believe that such students, “young people from all socio-economic strata and from all kinds of life
experiences, who truly represent our society,” have much to contribute.
“We think it’s important for law firms, for government, for the corporate world, for charitable organizations to have people who come from very different places,” John says. “A USC Gould law degree or a USC or MSU undergraduate degree can really take these people places where their contribution is going to be unique.”
Born in Long Beach, Calif., John studied political science with an interest in economics and philosophy as an undergraduate. When considering graduate school USC law school was a perfect fit. “It was a very intimate school, with a smaller, closer-knit community that really suited me well.”
Living in Law House, a retired fraternity off Greek Row used primarily to house law students, John got to know many of his classmates well. He and his housemates hosted the faculty for an annual dinner.
“Those were the things that really made for strong personal relationships,” he says. “I felt like I knew Dean Dorothy Nelson pretty well, as well as some of the faculty. And beyond my legal education, I ended up learning more about myself and about other people, which influenced the interests I pursued.”
Being open to new experiences and opportunities has served John well, and he hopes that future generations of students at USC Gould will take a lesson from his journey.
“You can try to plan your life, and you may think you know what your career is going to be, but it’s actually all the unplanned stuff that happens along the way that makes it so interesting.”