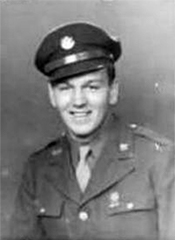 A Trip to the Past

Bill Birnie JD 1951 fought in World War II in the Battle of Wingen.

Their destination was Wingen-sur-Moder, a town near Strasbourg, population 1,614. Photos from the visit show Birnie, in his World War II infantryman jacket, on the steps of the local church. In January 1944, he and his platoon had spent four days inside that building - in German captivity.

Birnie can recall in detail the story of their liberation, how they heard the artillery fire and the gunfire that followed and how some men in the church yelled "GIs in here! No grenades!" while others whispered "Shut up! The Germans are still out there!" When the doors finally flew open, the soldier outside was an American. They were free.

The picture that emerges from Birnie's retelling of his experience in Wingen is one of chaos and horror. But below the surface, it also reveals something about the veteran's character. He is a courageous and humble man. He is compassionate and caring.

Bill Birnie grew up in the Fairfax district of Los Angeles. Excelling at baseball and football, he finished high school in the winter of 1942-43. Shortly after, he received a letter from the President, telling him that he had been inducted into the United States Army. "I think it started off with 'Greetings!'" he says.

Birnie spent about a year taking Army-sponsored college courses in engineering at Montana State University, received combat training in Oregon and Missouri and left in December 1944 for the frontlines of the war in Europe. Asked about his mindset during the months of preparation, he says that it seemed like a great adventure. He admits to feeling scared later.

Just weeks after landing with the 70th Division Infantry, 276th Regiment in Marseille, Birnie found himself fighting the 6th SS Mountain Division in the Battle of Wingen. He and his comrades were sleeping in the local Hotel Wenk in the morning hours of January 4 when they heard shouts of "Get your mess kits!" followed by German machine gun fire. "They had automatic weapons," Birnie says. "We had smaller rifles, because we were engineers."

He and some other men initially managed to hide in a tool shed, but they later ended up back on the second floor of the Wenk. This time, they were trapped, with the Germans yelling "Americans, give up!" Birnie spent the next four days as a prisoner, first in the schoolhouse and then in the church.

By the time he left Wingen - U.S. troops retook the town on January 7 - Birnie knew war to be nothing like an adventure. He had seen Americans and Germans die violently; he was almost killed himself when a mortar shell missed him by a foot and a half; and during his captivity he was wounded by shrapnel in the left arm when U.S. artillery shelled the church. Though he makes no big deal of it, he probably saved a life when he hid a comrade's knife in a stovepipe during a German body pat down. But he also saw American and German medics work side by side on the wounded without questioning their nationality. They just said, "Here's a patient. Let's fix him up!" And he recalled befriending a young German soldier who was studying at the University of Berlin, spoke some English and seemed like a nice guy. Birnie later found him dead outside the medical unit. "I felt sorry for him," he says. 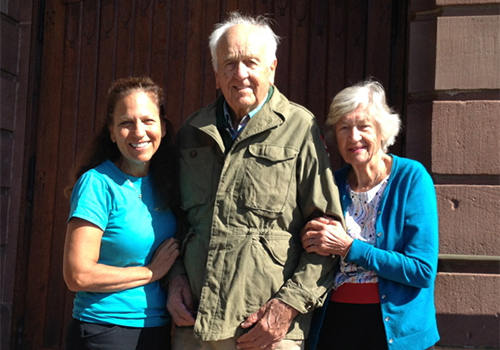 After the war, Birnie began studying at USC. His wife of 67 years, Barbara, was Helen of Troy and Vice President of the student body. Two of their three children (and two of their spouses) are also Trojans. Birnie made a career as a trial lawyer in L.A., first with Employers Mutual of Wausau, then with Schell, Delamer & Loring and, for the last three decades, with Carnation Company. He enjoyed the work. "It was kind of combative," he says. "And you have to think on your feet."

Now, Birnie is enjoying his retirement. His World War II medals include a Bronze Star and a Purple Heart, both of which he keeps in their original cases. Other memorabilia, like the dog tags and his Combat Infantryman Badge, stay in an old Remington electric shaver box. Nearly 75 years have passed since his time in Germany, but Birnie's memories have not faded.