It was 1:40 p.m., and in the basement of the law school, students were having a heated debate over a case of child endangerment. The case? A homeowner had been found to have a chainsaw left in the yard with children running around, though no one had been injured. One student argued that because the children hadn’t been hurt, he could not be sued.

Another student burst out of her seat, standing up to argue that even though the children hadn’t been hurt, it was still endangerment. “Safe before sorry!” she exclaimed, to the cheers of her classmates.

But despite their enthusiasm, these students weren’t law school students. In fact, they hadn’t even graduated high school.

Such Street Law programs are made possible in part by a grant from USC’s Good Neighbors Campaign.

Bringing Law School to the Community

“It’s one of my favorite things I did as a 1L,” said Kelly Welch ’12, Mentor Day co-chair. “I was new to L.A. so it’s a great way to feel connected to more than just this building. It’s a phenomenal program. As a 1L, you’re learning a ton, but you’re not qualified to do much as a lawyer, so it’s a great way to use the knowledge you’re getting.”

Mentor Day was the culmination of the program, giving students a chance to listen to a professor lecture, a panel on college, a copyright lesson, talk with law students during lunch and win free USC prizes in a raffle at the end of the day.

Dean Scott Altman gave a lecture titled “Property and Possession, or How a Baseball is like a Fox,” a lecture he is known for giving to first-year law students in his class. Though students were hesitant to raise their hands at first, Altman warmed the room up with jokes, and students were soon laughing and clamoring to participate.

“I expected the professor’s lecture to be boring, to have no humor at all, but it was really fun,” said Eris, a 10th grader from New Designs Charter School.

But despite the rousing lecture, for many, the most valuable portion was the college panel in which law students spoke about their experiences applying to college. Loans and financial aid were also discussed. Many panelists, like the local students, did not have family members who had gone to college.

Amanda Smith ’12, president of the Black Law Students Association, told students that as a first-generation college student, she had a difficult time going through the application process alone. “But going to college was the best decision of my life,” she said.

Topics from the moderator ranged from financial aid to how to make oneself a competitive candidate, but questions from the students were the most insightful. One student asked, “Has anyone ever made you feel like you couldn’t make it and then you proved them wrong?”

Smith had some words of advice. “It has to be hard for all of you right now because you care about school. When I was a freshman, people would tell me, ‘You talk white, you act white,’ because I cared about my education, talked properly and had a vision for my future,” she said. “But I promise you that if you keep going on the path you’re going, you will see them later and those same people will not be going anywhere. Just keep doing what you want to do, don’t let anyone knock you down and you’ll succeed.”

Practically all of the students raised their hands when asked if they wanted to go to college by panel moderator and Street Law president, Derek Lipkin.

But when Lipkin ’12 asked if they had friends who were on the fence about college, students responded with an overwhelming “yes.”

“You guys are really powerful. You have the ability to convince your friends, so don’t be afraid to be each other’s best advocates and encourage each other,” panelist Maya Sukumar ’12 said. 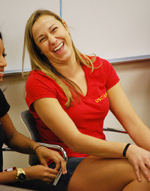 The impact of the panel was apparent.

As Street Law volunteers mingled with the students over pizza at lunch, Ivana, a 10th grader at New Designs Charter School, said, “I’m glad to know that people out there want us to go to college. It’s really encouraging. Everyone here is so nice. I’ve gone to a community college to take classes before and the environment is really different. At the other school it felt more like they were pushing us through the stages, but here they really want us to go on and succeed.”

Though she commended New Designs, she said that at the previous high school she attended, students were expected to work instead of attend college. But sitting with her friend Charlot, it was clear that the two had already thought ahead. USC was in both of their top choices. “We’re supposed to live together if we come here,” she said.

Aleshia, another 10th grader from New Designs, appreciated the panelists for their honesty. “I love how encouraging everyone is,” she said. “How they didn’t let anything or anyone stop them. They said actual life stories instead of just saying it was easy.”

Other students said the most helpful lesson from the panel was how to find financial aid. For many, this is a big setback.

“They like to think that they are thinking about college, but in reality, I think most aren’t,” said Glenda Watanabe, a teacher at South East High School. “Cost is a huge thing. The message from panelists about how to get a loan and how they can pay it back is a good message.”

Watanabe said that although most of her students aspire to go to college, most don’t have the background of college in their family. Though the school tries to supplement that, programs like Street Law help.

“The Street Law program which allows 1L students to come out to classrooms is great,” she said. “As a teacher, I think it’s invaluable. To see someone excited, engaged in college is beneficial to them. When I go back and I keep hammering in the idea of college, this is a message that I can keep referring to.”

“It’s great to give back to the community since I came from it,” he said.

Muñoz grew up in South Central Los Angeles and said college was not an option for him.  Though he had poor grades in high school, he attended community college and was able to transfer to University of California, Berkeley.

He said programs like Street Law are instrumental in encouraging students to consider higher education.

“When I was in high school, I didn’t have a program like this—maybe that’s why I did so badly,” he said. “I used to think that the world started and ended in South Central L.A. It’s good for them to get this information early on, to expand their horizons and see the possibilities.”

Although getting to hear people with similar backgrounds is important, Muñoz said encouragement is the most important part.

“We had Latinos and blacks on the panel. It’s good for them to see people like them who’ve made it,” he said. “But the messenger doesn’t matter so much as the message. As long as you get the right message across…that’s why it’s so great to have a program like Street Law with so many people who care.”