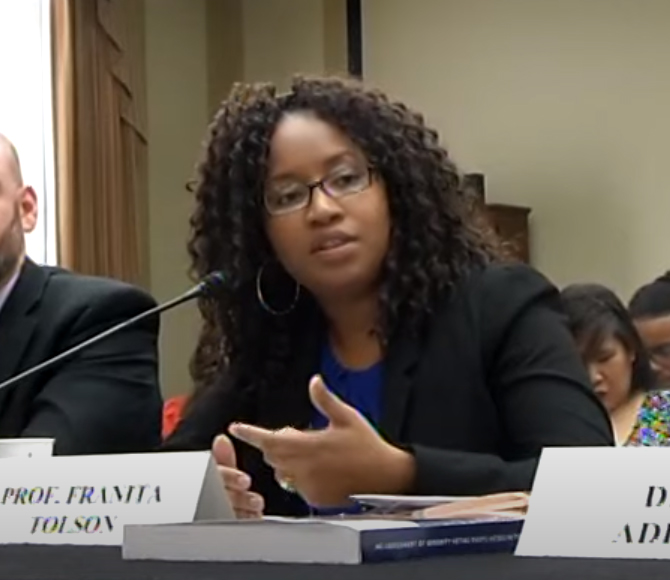 Franita Tolson, Vice Dean for Academic and Faculty Affairs and Professor of Law at the USC Gould School of Law, has been selected by CNN as an election law analyst for the 2020 election cycle.
Professor Tolson – whose research ranges from voting rights and accessibility to partisan gerrymandering – will provide perspective, context and analysis for CNN’s coverage of the presidential race.
As a nationally respected scholar in constitutional law, election law and legal history, Professor Tolson in 2019 testified before the House Judiciary Committee about the reauthorization of the Voting Rights Act. Professor Tolson recently authored a legal analysis for an amendment to the U.S. Constitution, introduced by Sen. Elizabeth Warren and Sen. Richard Durbin, to explicitly protect the right to vote.
Professor Tolson earlier this year was tabbed to work with Facebook to help the platform better identify voter suppression and encourage voter turnout, and she is also the co-host of a popular podcast “Free and Fair with Franita and Foley” with Professor Ned Foley of the Ohio State University Moritz College of Law.
In addition, Professor Tolson has provided commentary or been cited in numerous news outlets and professional blogs, including The New York Times, The Washington Post, the BBC’s The Real Story podcast, C-SPAN, Los Angeles-area public radio station KPCC-FM, The Guardian, The Philadelphia Enquirer, and the American Constitution Society Blog.
Professor Tolson is currently working on a book, In Congress We Trust?: Enforcing Voting Rights from the Founding to the Jim Crow Era, to be published in 2021 by Cambridge University Press. Her research has been published in leading law reviews including Boston University Law Review, the Vanderbilt Law Review, the Alabama Law Review, the Notre Dame Law Review as well as the Yale Law Journal Online and the University of Pennsylvania Law Review Online.
Before entering academia, Professor Tolson clerked for the Hon. Ann Claire Williams of the United States Court of Appeals for the Seventh Circuit and the Hon. Ruben Castillo of the Northern District of Illinois. She is a graduate of the University of Chicago Law School.